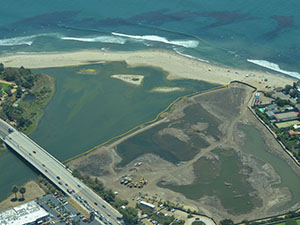 The Malibu Lagoon Project was a high profile, challenging coastal restoration and earthwork project. The project was closely scrutinized by several government agencies including Santa Monica Bay Restoration, the Coastal Commission, the National Park Service, and Sierra Club. This approximately $5 million restoration and enhancement project completely redesigned, re-graded, and re-contoured the lagoon with more natural grades and elevations to allow for the “natural flush” and water flow of the lagoon during open conditions. The project included heavy earthwork, vegetation removal, and installation of erosion control repairs along the waterline to improve flood protection in the area. 4LEAF was responsible for ensuring all contract and permit compliance was followed and documented.  The project included building a temporary tidal barrier through the main lagoon to allow for the re-grading of the western portion of the lagoon, release of approved filtered/treated ground water to the ocean, verifying soil grading compaction reports, and constructing the project from approved submittals.  4LEAF closely monitored each permit issued for compliance to ensure the contractor was performing the scope properly and served as the liaison between the contractor, State Parks, and the agencies invested in the project.
Skills Posted on