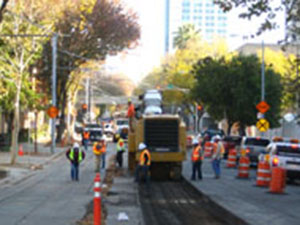 Project delays from before 4LEAF’s tenure led to considerable turnover in project staff.  4LEAF provided experienced replacements to keep the project on track to meet the critical revenue service.  Due to 4LEAF’s negotiation efforts, there was a 10 percent savings in change orders.

The project was also challenged by a deluge of spring rains and subterranean surprises including Indian artifacts and unmapped utilities.  The worst delays were caused by underground utilities not noted on maps – sewer and drainage systems, lines for water, gas, electricity and telephone, Internet and fiber-optic lines – which had to be moved or reconstructed away from the tracks.  During the critical phase of the Light Rail power and control systems installation, Sacramento Municipal Utility District (SMUD) suffered damage to power cables running through a manhole, which disrupted construction activities.  Our CM coordinated with RT, SMUD, and Sacramento City Fire personnel to keep the LRV control system testing on target, keeping the project completion on target.